As any mixologist will tell you, an ice cube is only as good as the water you freeze to make it.

And that is exactly what ice is: frozen water.

When I first heard the question: Are ice cubes dangerous? My first response was: “only if someone throws an ice cube at a dog’s eye,” but this question seemed to linger, gaining momentum due to a post online.

There was the reported case of a dog ingesting ice cubes and winding up at a veterinary emergency hospital requiring surgery to alleviate “bloat.”

Reportedly, the veterinarian in charge felt the cause of the bloat was due to the dog ingesting ice cubes. Bloat, or gastric dilation volvulus, is a dangerous, life-threatening condition that occurs acutely when the stomach fills with gas and then rotates within the abdomen. There has been much study of potential causes of bloat: genetics, diet, environment, exercise/activity have all been studied, and all may be potential factors in the development of bloat. Drinking too much water too fast or feeding large amounts of food immediately after exercise is never recommended, as this may make it more likely that a dog will gulp a lot of air along with water and/or food.

Dogs should always be allowed to cool down after they exert a lot of energy and excitement prior to being offered free access to food and to water, much like racing horses are walked and cooled down after a race. You can offer them water, but only small amounts at a time until the dog is calmer and rested, at which time free access can be allowed.

Ice cubes can actually be used to slow down the rate of ingestion of water by overly excited dogs.

Offering ice cubes is a way of adjusting the rate and amount of water a dog takes in. 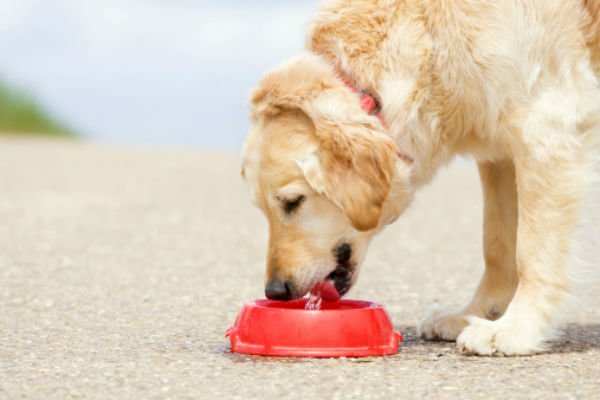 Veterinarians recommend offering ice cubes as a way to slowly introduce water to dogs recovering from surgeries or as a tryout after vomiting episodes associated with gastroenteritis, to see if they are able to hold fluids down.

I personally have placed ice cubes in my dogs’ water bowls when we are traveling, in an effort to encourage them to drink more water.

Ice has also been discussed in relation to dogs overheating (heat stroke). Like everything in life, there are wrong ways and right ways to handle heat stroke:

First, prevention is the best cure. NEVER leave dogs unattended in any situation where they can overheat, such as a parked car, even with windows open. Dogs should also be monitored during excessive exercise, as certain dogs or breeds will continue to play hard, despite their bodies telling them to stop. Owners should be constantly aware of an excessively panting dog and/or sounds of harsh labored panting and breathing. These are signs that an immediate time-out period is needed, preferably in a cool, shaded, or air-conditioned area.

Even for those dogs that do not appear to be cooling down, it is never a good idea to douse them in an ice bath. Too much too soon can cause a potentially dangerous cascading chain of events. It is better to use cool water-soaked clothes or towels, along with fans or air conditioning. A trip to the veterinarian is always indicated for dogs exhibiting signs of heat stroke, as some signs may develop after the event.

Finally, ice cubes are not dangerous to dogs, per se. So, if you’re thinking about offering an ice cube . . . chill. It’s OK.