The Miniature Schnauzer, the smallest of the three Schnauzer breeds, is a generally healthy, long-lived, and low-shedding companion. Add an outgoing personality, a portable size, and sporty good looks, and you’ve got an ideal family dog. 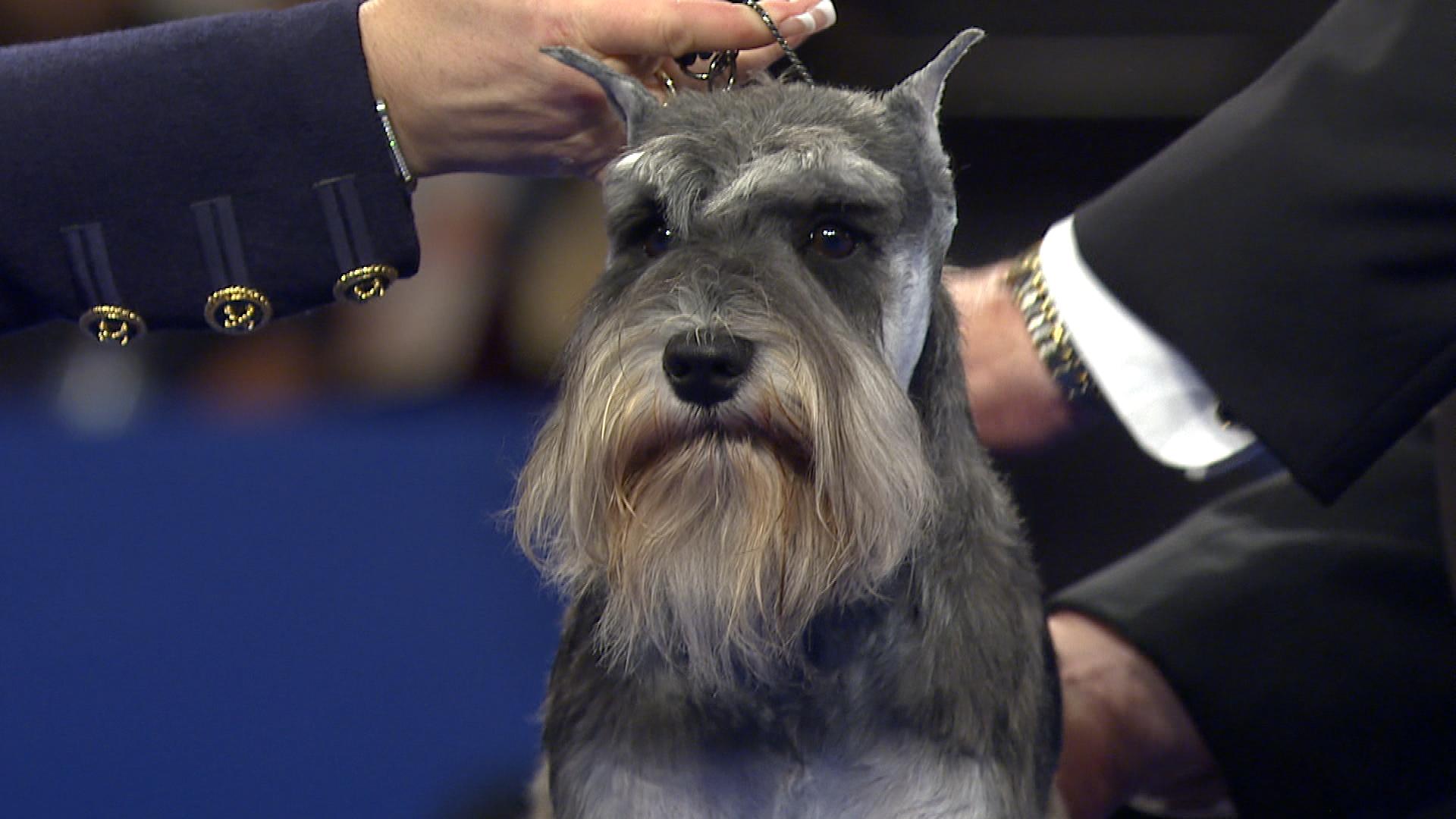 About the Miniature Schnauzer

Stocky, robust little dogs standing 12 to 14 inches, Miniature Schnauzers were bred down from their larger cousins, Standard Schnauzers. The bushy beard and eyebrows give Minis a charming, human-like expression. The hard, wiry coat comes in three color patterns: salt and pepper, black and silver, and solid black. Created to be all-around farm dogs and ratters, they are tough, muscular, and fearless without being aggressive.

The Miniature Schnauzer is a bright, friendly, trainable companion, small enough to adapt to apartment life but tireless enough to patrol acres of farmland. They get along well with other animals and kids. Minis are sturdy little guys and enjoy a vigorous play. Home and family oriented, they make great watchdogs. 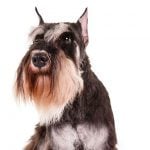 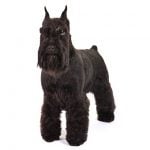 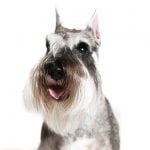 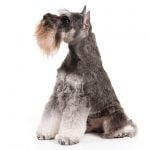 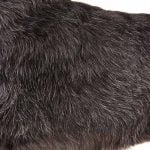 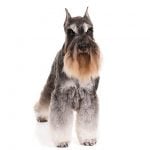 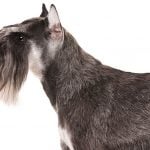 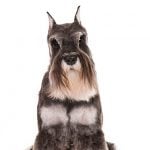 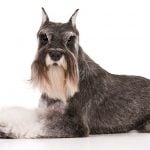 The Miniature Schnauzer is a robust, active dog of terrier type, resembling his larger cousin, the Standard Schnauzer, in general appearance, and of an alert, active disposition. Faults – Type – Toyishness, ranginess or coarseness. 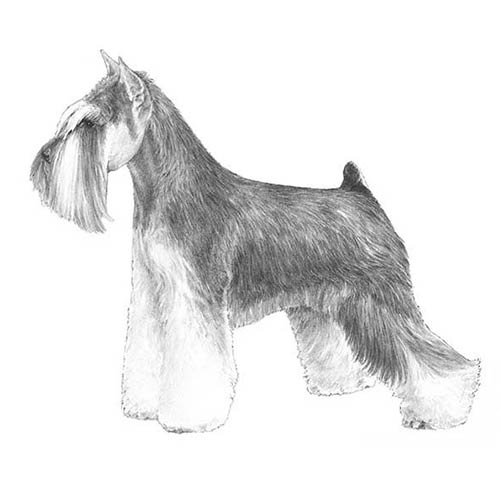 Small, dark brown and deep-set. They are oval in appearance and keen in expression. Faults – Eyes light and/or large and prominent in appearance.

Short and deep, with the brisket extending at least to the elbows. Ribs are well sprung and deep, extending well back to a short loin. The underbody does not present a tucked up appearance at the flank. The backline is straight; it declines slightly from the withers to the base of the tail. The withers form the highest point of the body. The overall length from chest to buttock appears to equal the height at the withers. Faults – Chest too broad or shallow in brisket. Hollow or roach back. Tail– set high and carried erect. It is docked only long enough to be clearly visible over the backline of the body when the dog is in proper length of coat. A properly presented Miniature Schnauzer will have a docked tail as described; all others should be severely penalized. Fault – Tail set too low.

Forelegs are straight and parallel when viewed from all sides. They have strong pasterns and good bone. They are separated by a fairly deep brisket which precludes a pinched front. The elbows are close, and the ribs spread gradually from the first rib so as to allow space for the elbows to move close to the body. Fault – Loose elbows. The sloping shoulders are muscled, yet flat and clean. They are well laid back so that from the side the tips of the shoulder blades are in a nearly vertical line above the elbow. The tips of the blades are placed closely together. They slope forward and downward at an angulation which permits the maximum forward extension of the forelegs without binding or effort. Both the shoulder blades and upper arms are long, permitting the depth of chest at the brisket. Feet short and round (cat feet) with thick, black pads. The toes are arched and compact.

Double, with hard, wiry, outer coat and close undercoat. The head, neck, ears, chest, tail, and body coat must be plucked. When in show condition, the body coat should be of sufficient length to determine texture. Close covering on neck, ears, and skull. Furnishings are fairly thick but not silky. Faults – Coat too soft or too smooth and slick in appearance.

The hindquarters have strong-muscled, slanting thighs. They are well bent at the stifles. There is sufficient angulation so that, for instance, the hocks extend beyond the tail. The hindquarters never appear overbuilt or higher than the shoulders. The rear pasterns are short and, instance, perpendicular to the ground and, when viewed from the rear, are parallel to each other. Faults – Sickle hocks, cow hocks, open hocks or bowed hindquarters. 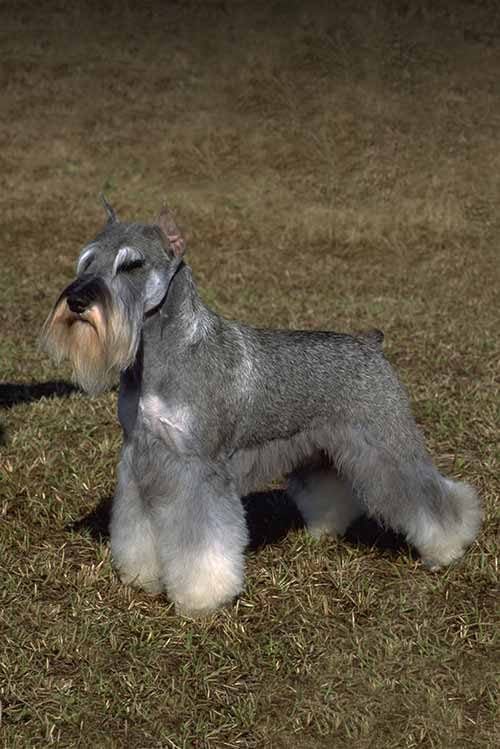 Nutrition
The Miniature Schnauzer should do well on a high-quality dog food, whether commercially manufactured or home-prepared with your veterinarian’s supervision and approval. Any diet should be appropriate to the dog’s age (puppy, adult, or senior). Some dogs are prone to getting overweight, so watch your dog’s calorie consumption and weight level. Treats can be an important aid in training, but giving too many can cause obesity. Learn about which human foods are safe for dogs, and which are not. Check with your vet if you have any concerns about your dog’s weight or diet. Clean, fresh water should be available at all times.
Grooming
The Miniature Schnauzer has a double coat—a wiry topcoat, with a soft undercoat—that requires frequent brushing, combing and grooming to look its best. The breed sheds very little. For the show ring, some of the dog’s coat is regularly “stripped” by hand. Most owners of pet Miniature Schnauzers choose to have the coat trimmed with clippers by a professional groomer. This should be done every five to eight weeks for the dog to look his best. The Miniature Schnauzer should get a bath once a month or so, depending on his surroundings. Nails should be trimmed monthly and ears checked weekly for debris or excess wax and cleaned as needed.
Exercise
Alert and lively, Miniature Schnauzers require regular daily exercise to maintain their mental and physical health. They have a medium energy level and can easily adapt to city or country living. The breed benefits from having a fenced area where they can run and chase a ball safely and enjoy playtime with their owner. Their greatest joy is to be with their family and doing activities together. Miniature Schnauzers have a strong prey drive, so they should never be allowed off leash when not in a fenced area, as they might not resist the urge to chase after small animals.
Training
Miniature Schnauzers are friendly, lively, and eager to please, and they learn quickly. The breed’s high intelligence makes it necessary to keep training fun and interesting, as they can get bored with repetition. They should be socialized from an early age, and both dog and owner benefit from puppy training classes as well. The Miniature Schnauzer makes an excellent companion and can do very well in a number of canine sports, including agility, obedience, rally, and earthdog events.
Health
The Miniature Schnauzer is generally a healthy breed. There are a few conditions that the breed can be prone to, including cataracts, hyperlipidemia, pancreatitis, liver shunts, and urinary stones. Responsible breeders will have breeding stock tested for health issues that can affect the breed. Owners should keep tabs on their dog’s overall condition and consult their vet with any questions or concerns that may arise. Dental care is an important aspect of overall health, and the dog’s teeth should be brushed frequently.

The breed today known as the Standard Schnauzer, one of Europe’s supreme all-around farm dogs, has a lineage going back to at least the 15th century. Old-time German farmers bred the Standard down to miniature size, the better to work as fearless barnyard ratters.

With his rat-dog background, the Miniature Schnauzer resides in the AKC Terrier Group with other diminutive rat-catcher breeds. But the Mini is unique among AKC terriers in that he has no British blood in his veins. The vast majority of the terrier breeds were developed in the British Isles. The few created outside of Britain—the Rat Terrier or the Cesky Terrier, for instance—were created with crosses to existing British breeds.

Alone among terriers, the Miniature Schnauzer is wholly a product of Continental stock: Standard Schnauzer, Affenpinscher, and Poodle. This explains that though the Mini was born to the traditional work of small terriers, his personality is quite different. Not for him is the dour independence of the Scottish Terrier or the fiery temperament of the Irish Terrier. Rather, he is an overly friendly dog, spirited but obedient and willing to please.

For the most part, the Miniature Schnauzer’s ratting days are long behind him. Today, he is best known as a charming and attractive companion, and a steady winner at dog shows here and abroad. Of the three Schnauzer breeds, the Miniature ranks consistently highest in AKC registrations. 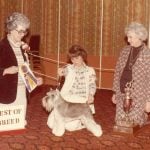 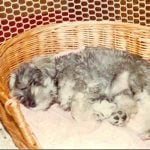 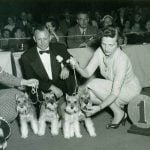 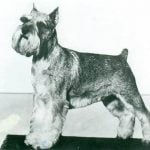 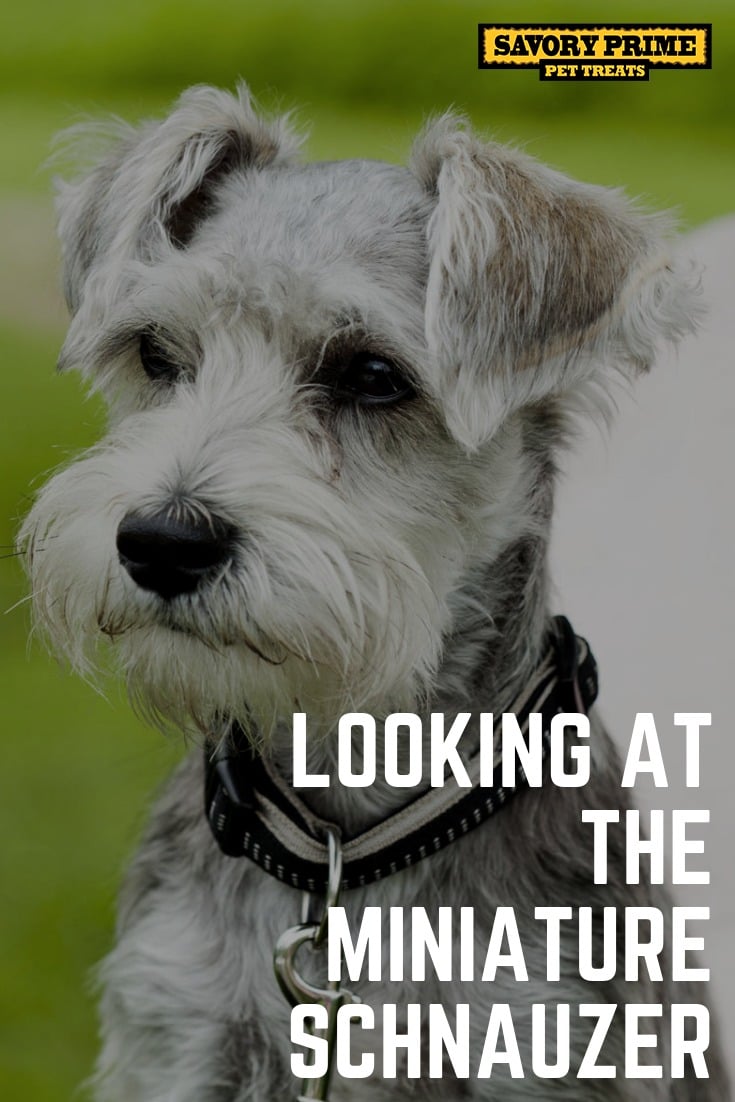 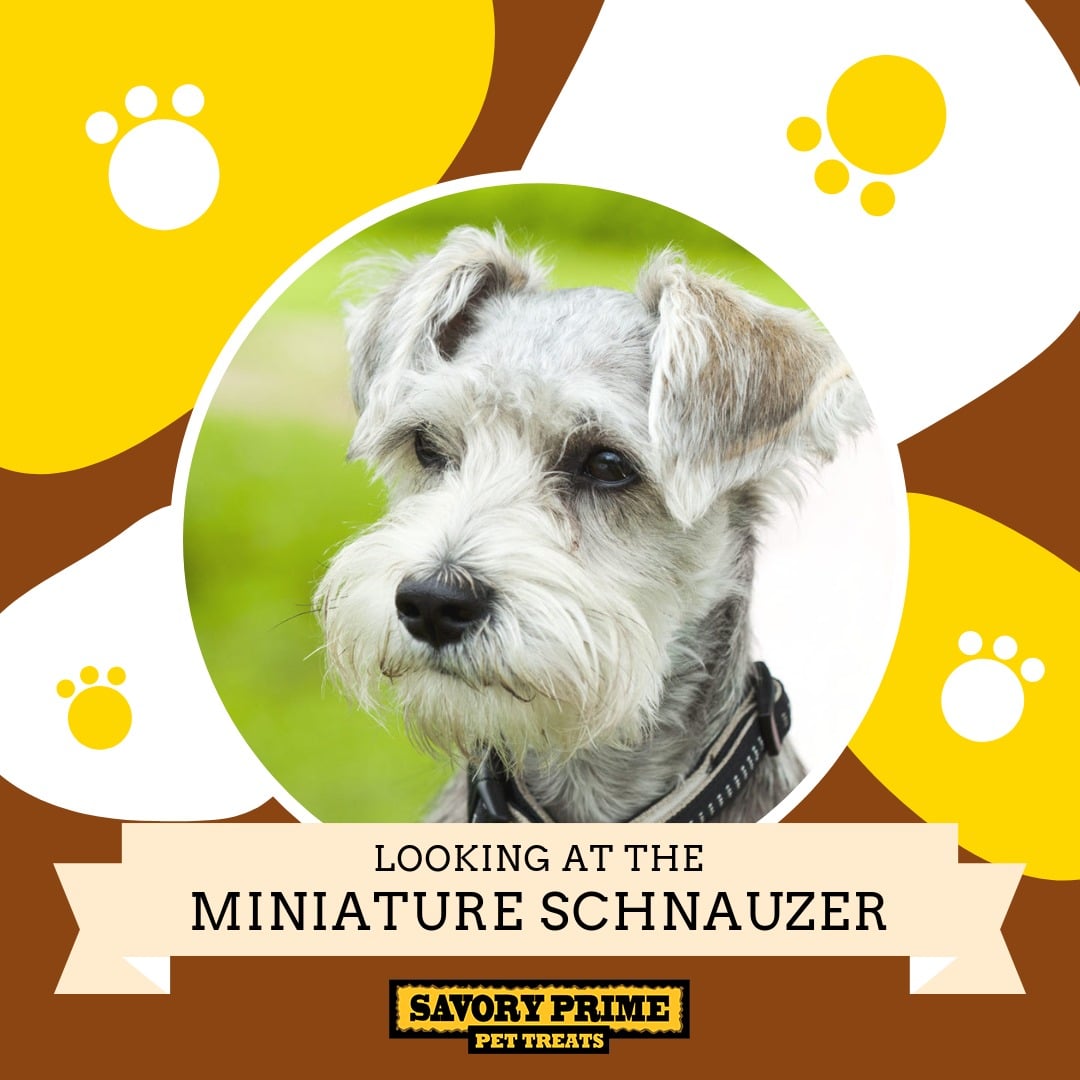