When you’re raising a puppy there can be a parade of behavioral issues that march through his—and your—life. Separation anxiety (SA) can be one of them. Understanding and recognizing the problem is the first step. Then you will be equipped to address it right from the start. This is key because, as the Tufts Animal Behavior Clinic says, once canine behaviors are established, it takes time and work to change them. So it’s better to prevent puppy separation anxiety before it starts—and that time is in puppyhood. 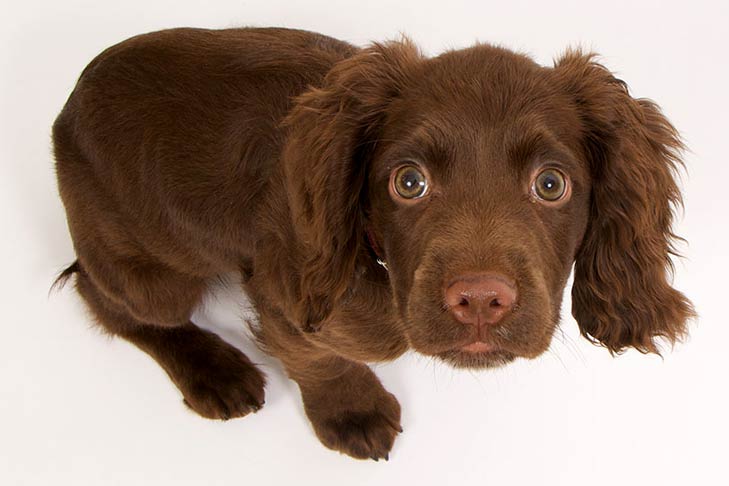 What is puppy separation anxiety?

It’s fairly straightforward: Whether in a puppy or an adult dog, separation anxiety is when your dog exhibits stress and/or behavioral problems when left alone. Sadly, it is also one of the most common reasons why owners get rid of their dogs. This is especially unfortunate because it is an issue that can be treated by implementing a few simple but important tactics.

Here’s the good news: As the responsible owner of a new puppy, hopefully, you’ve laid the foundation for a well-adjusted, well-behaved dog through puppy training, socialization, crate training, and the investment of time and consistency. Therefore, many of the recommendations here are things you are already doing, or have done. That said, SA does present some unique challenges.

What is the difference between separation anxiety and normal canine behavior? 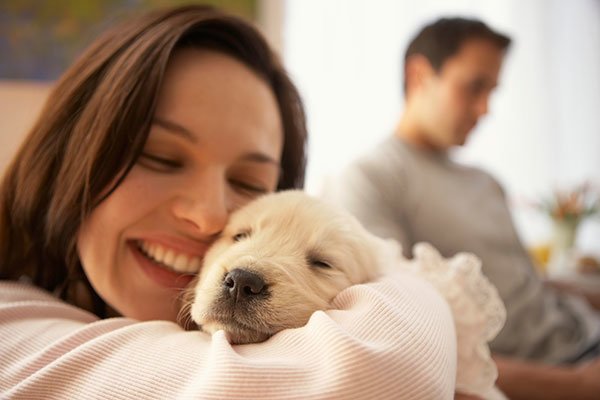 Separation anxiety is a serious condition, and it goes beyond the occasional mournful whimper when you leave the house or the shredded sock waiting for you upon your return. It is also not the same as boredom, and unlike a little mischief when your dog is left alone, separation anxiety is the result of legitimate stress.

Genuine separation anxiety is not just your puppy’s anxiety when you leave—it continues to plague your dog until the moment you return.

What are the signs of puppy separation anxiety?

Here are some of the behaviors your dog may exhibit. One or two of them, that happen occasionally, may not be a sign of puppy separation anxiety, but if he has multiple episodes of more than a few of them, he is most likely suffering from SA.

It’s unclear why some puppies are more prone to separation anxiety than others. There’s some anecdotal evidence to suggest it’s more common in shelter dogs, who may have been abandoned or suffered the loss of an important person in their life. The more people-oriented breeds may likewise be more susceptible. Also, smaller dogs can be prone to separation anxiety if they’re accustomed to near-constant companionship. Life changes can also cause the condition, including a sudden change in schedule, a move to a new house, or the sudden absence of a family member, whether it’s a divorce, a death in the family, or a child leaving for college.

What can I do about puppy separation anxiety?

Neither you nor your puppy wants this constant cycle to continue. It’s difficult seeing a beloved pet under so much stress and just as difficult to come home to mayhem and destruction. While there’s no magic bullet, there are some things you should try.

As said, these methods should already be part of a puppy’s routine, but they’re also specific to addressing SA. 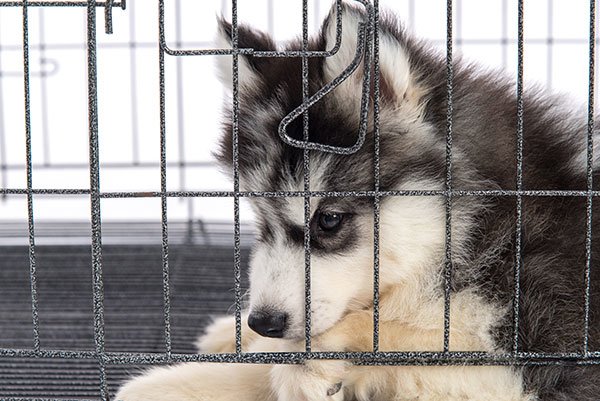 1.Crate Training
Husky with separation anxiety it’s well-established, but it always bears repeating: The crate is your dog’s ally, and it’s an important training tool and the solution for a number of puppy challenges. It’s neither cruel nor unhealthy. Look at it this way: For millennia dogs have been “den animals.” In the wild, they use small, enclosed spaces for protection, warmth, and to raise their puppies. This hardwired instinct can be employed to give your pup a safe, quiet place to retreat to. Especially when you’re not home. Some dogs feel safer and more comfortable in their crate when left alone. Watch his behavior in the crate to see if he settles right down or if the anxiety symptoms ramp up.Crate training is a subject unto itself, so here is everything you need to know.

2. Conditioning
Conditioning is an important element of raising a mentally and physically healthy new puppy. In some cases, you can try to relieve his dismay by teaching him that separation has its rewards. Right now, he’s conditioned to go into stress mode when he knows you’re leaving him. Try countering that reaction by using a “high value” treat—something he especially loves, and that you only bring out for important lessons and rewards. If he gets a treat right before you leave, he might even begin to look forward to your departure.Begin conditioning your puppy early on by leaving him for very short periods of time and gradually lengthening the amount of time you’re gone. 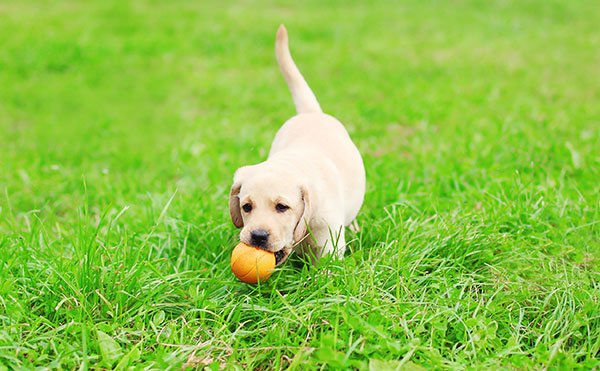 3. Exercise
Lab puppy playing with a toy. Physical: Make sure your puppy gets plenty of exercises. This is especially true for large, high-energy dogs with a lot of it to burn off. A tired, contented dog, who’s had a brisk walk and playtime with you, is more likely to settle down when you leave. Mental: Dr. Brian Kilcommons, of The Pet Docs, says, “Mental exercise is just as important as physical, if not more. Games that build his self-control, focus, and patience are key to him getting better when alone.” Kilcommons’ book, My Smart Puppy, provides games that will develop and occupy that busy puppy brain.

4. Medication and Natural Supplements
Sometimes, no amount of training and conditioning will help. Some vets recommend medication such as amitriptyline, which is used to treat depression, or alprazolam, which is prescribed for anxiety and panic disorders. These require a prescription and are safe for most pets, though you’ll need to consult with your vet and be extra diligent about the use of medication with a young dog.  Another option is natural supplements and homeopathic treatment. Natural supplements that help ease anxiety in dogs include the amino acid L-theanine, chamomile, passionflower, St. John’s Wort, and valerian. AKC Family Dog columnist Dr. Shawn Messonnier suggests that natural supplements help ease anxiety in dogs because they have various mechanisms of action that function to alter neurotransmitters in the brain (such as serotonin, GABA, or dopamine), to induce a sense of peace and calmness.

5.Play it Cool
PetMD recommends that you not pay attention to your dog when he follows you around closely. Most behaviors considered “attention seeking” can be modified by ignoring them. When you’re about to leave, try not to give cues that your pup will begin to recognize. In other words, depart calmly and without fanfare.In the Merck Veterinary Manual, Drs. Gary M. Landsberg and Sagi Denenberg say that a daily routine can be established that provides stability and predictability for the puppy, beginning with meeting the dog’s social and physical needs, followed by sessions of inattention during which the dog is given the opportunity to nap and rest or to engage in exploratory play with his food and chew toys.

Separation anxiety in puppies and dogs isn’t always preventable, despite your best efforts. But with patience and a positive attitude, you may be able to reduce your puppy’s suffering. It can be a complicated process, so consider working with a Certified Applied Animal Behaviorist or a veterinary behaviorist. 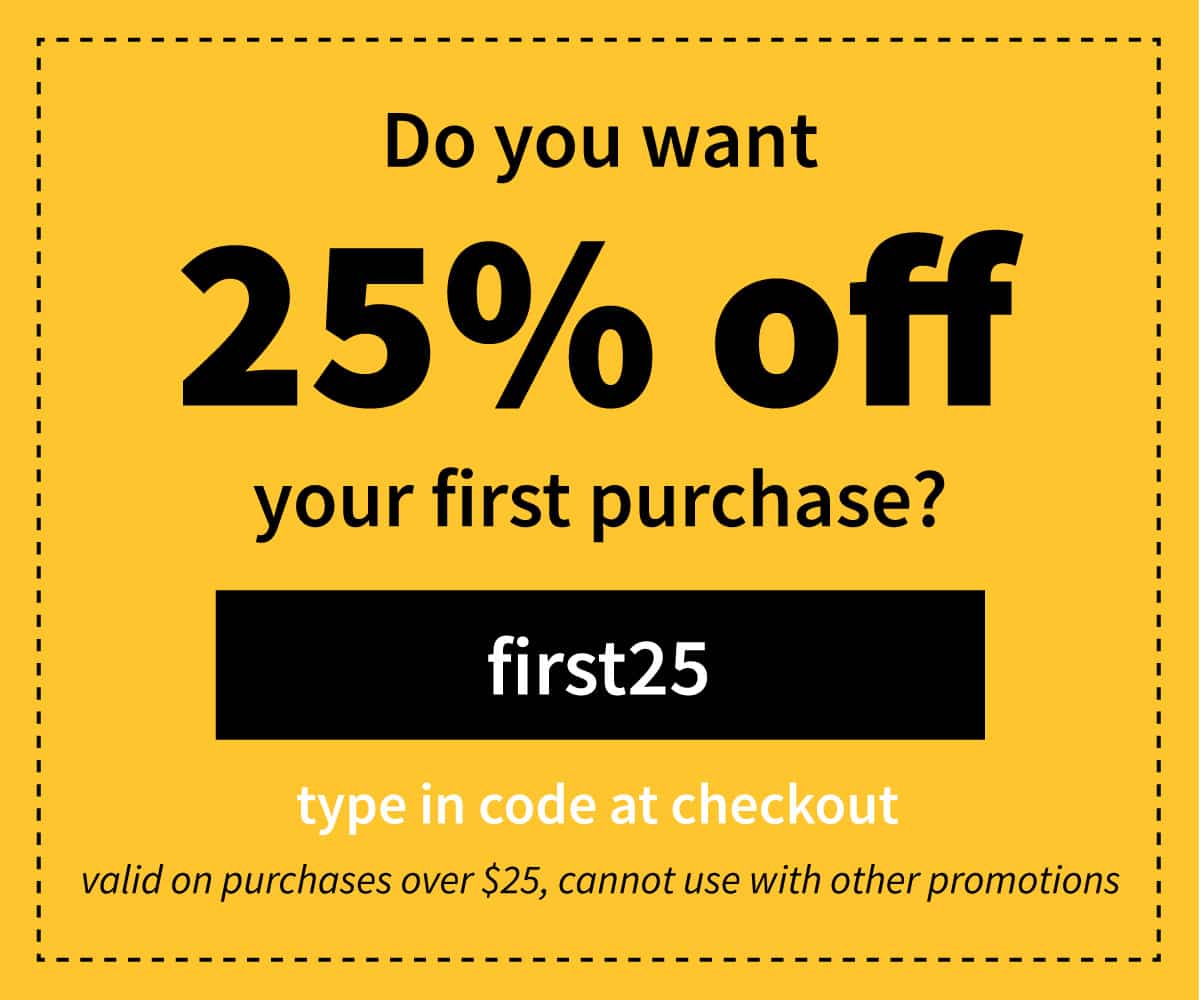